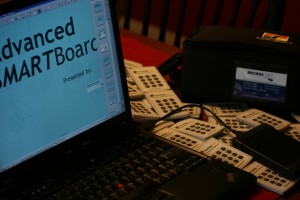 Grrr… I hate typos.  I mean I really hate them.  It makes a person seem ignorant.  Like they can’t spell.  When in fact that may not even be close to the case.

Case in point.  I have been working all day on this week’s workshops for the Maroa-Forsyth School District.  Mom and I are headed over to Maroa High School for a 3 day training this week.  We were there last year and had a great time with the staff members that gave up part of their summer break to attend our beginner SMARTBoard sessions.  Well I decided, at the last minute, that I wanted to change some of the presentation as well as create a more detailed handout.

So…out came the external hard drive as well as the Turning Point to do some screen captures.  I wanted to include these updated screen captures to the handout to make things as clear as possible.

(I hate it when I attend a session and things seem crystal clear only to return to a handout a month later and have absolutely NO IDEA what it means. Consequently, I try to avoid that for the participants in our workshops!)

So after getting all of the handouts finalized, creating viewable on screen PDF forms of them all, and creating the printed packets….you guessed it.  I found a typo.  Click on the glob icon should have been click on the GLOBE icon.

So now the dilemma.  Do I point out my typo and plead with my workshop participants to believe it when I say I am not a complete idiot?  Or do I kill a tree and throw out the old handouts on account of one silly little e?

Grrr…  Have I mentioned that I hate typos?

Leave a Reply to Nancy a.k.a. "Mom" Cancel reply