by recesstec
It was pointed out to me by a friend that MSN reported January 18th as the bleakest day of the year 2010.
We were fortunate then.
Several times that day Shannon and I looked out the window to view the gray and foggy skies and commented that we were happy to be conducting a workshop, and that the fact that it was such a dreary day provided no regrets that we were working on a day off from school. 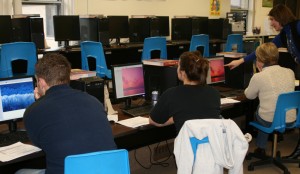 In fact, we hardly felt like we were working.
First, It was a long trip since Shannon lives as far east from the center of the state as Camp Point is west.
It was also a relaxing trip and a “first” for Recess TEC in that we had to find a “room at the inn” due to the distance.
But most important, we had the good fortune to meet new friends at Camp Point School District.
The teachers there were, well….
“Enthusiastic” doesn’t even describe it.
They gave up their holiday to rise early, without pay, and join us for a day-long session in SMARTBoard training.
The morning was spent showing ways the board can be used in classrooms, and despite the fact that several had had their boards for a couple of years, they were never distracted and they were very focused on the new things they were seeing. They were open to sharing, helping, and making suggestions to encourage each other.
Bleak day? Can’t say that it was for us…
reflections SMARTBoard workshops