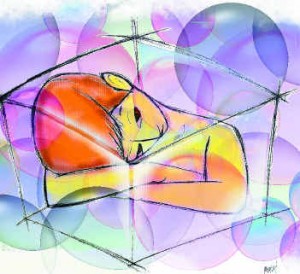 My niece, Allison, came into our lives thirty years ago. She has provided us with a glimpse of another world that we can’t begin to understand, only because we are limited in both our intellect and ability to “see” things the way she does. As a child, Allison “danced with the fairies” and was lost in thoughts that we could only wish to share with her. She was first diagnosed with significant developmental delays with “islands of ability” or possible “childhood schizophrenia”.  When Allison was five, her pediatrician called my sister, Diana, at work. He had just returned from attending a conference in California and was very excited to have found an “answer”.  Allison eventually was “labeled” autistic, and was placed in special classes in schools in Albuquerque, New Mexico. Diana worked as a political consultant at the state and federal levels, and used any and all connections she had to educate herself on autism. She became an officer in the Autism Society of America, and became proactive in securing the best help to enable Allison to become all she could be. Eventually we learned that Allison’s symptoms were best described as Asperger’s Syndrome, and she was not only very high functioning, but had an IQ that was far above anyone else in our family. When she was twelve, Allison described to me a book that she was reading about “parallel universes” in terms I could understand. My “Allison Stories” include finding piles of miniature notebook pages under her bed with hieroglyphics of different thoughts and messages filling each page, all easily translated by her at the age of eight. On a visit I took her to buy a bathing suit, and she absolutely needed the black one-piece with a huge beautiful sequined pineapple filling the front. How could I refuse? She loved nothing more than to sit in front of the television under a huge open golf umbrella watching Comedy Central and laughing with the audience. Her humor is quick, dry, and catches you off-guard bringing you to your knees. She has been to “Burning Man”, belonged to a tango club, belly-dances, and has taken Diana and me on a trip to southern France for the “Gathering of the Gypsies”. On our trip to Paris, her first request was to go to the cemetery to see the grave of Jim Morrison. On our trip through the Louvre, she was our personal guide. Just this past Sunday her post on Facebook read, “I just had a great day yesterday at Plunderthon. I and a bunch of other people dressed as pirates and went on a bender in Downtown Portland. Yyaaarrr!!!”

So, with Allison in mind, I chose to attend the NECC session entitled “Increasing Attention Span of Students with Autism Using Interactive Technology” presented by Randy Welch, Chief Program Officer, at the Spaulding Youth Center in Tilton, New Hampshire and Kathleen McClaskey, President of EdTech Associates. It was the first session that brought tears to my eyes. With a great deal of conviction and dedication, Randy described the difference that SMARTBoards made in five of their classrooms where the students ranged from ages 7 to 20. He described how the use of these boards help children focus on communicating and for the first time, they found words to relate their experiences and thoughts to their teachers, aids, and other children. Videos took us into the classroom and we were introduced to several of the children, specifically “Katie”, and watched their progress in ways that I have never seen before.

Leaving that session I was excited to share with Shannon what I had seen. I was convinced that schools need to require a SMARTBoard in every special class, and that interactive websites and Web 2.0 tools are included in their curriculum.

The school in which I teach now has SMARTBoards in every classroom. Two of our teachers who work with special needs children, both friends and partners with whom I have taught, attended our SMARTBoard workshops in the first session of our 2009 Summer Series. They were both excited and enthusiastic about the possibilities of how to use the boards in their classrooms, and I look forward to watching them grow and learn, and providing additional help and support to get them started on what promises to be an exciting path to an exciting future.

I invite you to read the handout that was provided in the workshop I attended.