That is the question I was asking at precisely 7:55 Saturday morning as Mom and I rolled into a town that I thought was Raymond, IL.  As it turns out, we were in Taylorville.  I found out this little piece of information as I pulled into a BP and asked “What town is this?”.  (I don’t EVER hesitate to stop and ask for directions…EVER!) The nice lady behind the counter smiled and said, “Taylorville”.  After I explained that I was supposed to be in Raymond at 8:00.  She informed me that I was going to be late.  It was about 15 miles away.

I’m “Mom”…and yes…
When the question came up, “Where are we?”, it was shortly after I observed,
“Shannon, that building says, ‘Taylorville First National Bank?”
Then after her question, I suggested, “Taylorville Senior Citizen Center?”

If there is one thing you should know about me…I hate to be late.  HATE IT.  I had a boss while I was in high school who did not tolerate being late for work…so I never was…except once.  And yes I got fired.  Don’t worry, I was rehired later, but that is a whole different blog entry.

“Mom”:  Back then she told me it was because “business was down, and they had to ‘cut back’…for now…”

So as I drove a little (OK..a lot) over the speed limit, we found ourselves in Raymond at 8:25.  Humiliated over the fact that we were late.  The workshop wasn’t scheduled to begin until 9:00…but still.  I told the facilitators that we would be there at 8:00 to set up.  That doesn’t mean arrive at 8:25.

“Mom”:  guess what…it was all good…and our participants could not have been nicer.
They even drew a map for us to help find our way back…taking the “Black Diamond Road”.
(“Black Diamond”?!  Have we mentioned how FLAT central Illinois is?)
It was on this road upon leaving the school, she turned left, instead of right.
“Where IS that map?  Here it is…OK…U-turn it…we need to head back in the opposite direction.”

Note:  It is necessary to know, that when traveling from “Point A” to “Point B” in this part of the country, you must

The end result of this little mix-up?  A corporate investment in a GPS.  After all we DO specialize in technology integration!

“Mom”:  That decision was made right after I asked, “Shannon, do you have a road map in here?”
Actually, I am a BIG fan of the road map when there is a passenger in the car…and I am the passenger.

I must back up a little before going forward in this first entry.  As we were driving through a small town on our way to Raymond, we came upon this grocery store. 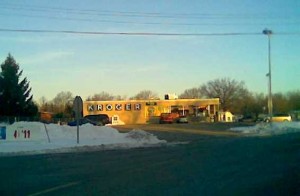 I felt like I was teleported straight back into 1960.  Seriously.  It was odd.  OK, so I wasn’t exactly born in 1960…or anywhere around that time.

“Mom:  that would make me old enough to be enjoying the retirement I have always dreamed of…in a little cottage in a region of France that has a name that sounds like wine. (Without a husband, but possibly a “traveling companion”…it IS France…).
Actually, I AM old enough to be retired somewhere in France…
but I still have a husband.

But I asked Mom and she thought I was right on target.  We stopped at this little grocery store to pick up some chocolate.  We make it a common practice to provide a steady stream of chocolate throughout any type of training that we provide.  It seems like a stress reliever for those who are not feeling as “pumped” as we feel about integrating technology within their classrooms on a daily basis.

As I was entering the store…I must have stood and stared at the “Out” sign on this door for 10 seconds before realizing that I was not going to get “In” the store through that door.

“Mom”:  I was in the car laughing. I’m the one with the cell phone camera.
I still capture those “precious moments” my little girl provides… 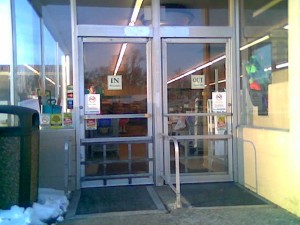 I realized that I had forgotten to throw the basket that we use into the car the night before when packing up all of our equipment.  We carry quite a bit of stuff in order to keep our bases covered when we get to a school.  You never know what you might find when getting ready to present technology related topics.  I didn’t really want to be the tacky corporation that just throws candy at its participants…bowl, basket, box, whatever type of container will do.  But we didn’t have one.  I didn’t think there was probably a chance that the store would have anything like that for sale, but I decided to ask the kind produce man arranging the grapefruit if they had that sort of thing for sale.

As it turns out they didn’t.  BUT…he went to the stockroom and dug around in some boxes and came up with a basket.  I told him I would return it on our way back through.  He smiled and said “Keep it in your car.  You never know when you might need it again.”

Yes…I think I had stepped back into time.

By the way…this is the picture of our candy basket at the END of the day.  Not too bad.  We must not have been TOO stressful since there was actually candy left over. 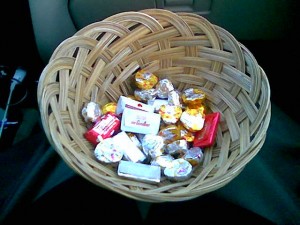 “Mom”:  We thought, in writing this blog, we would share things we learn on our “Excellent Adventures”.
For this workshop, we were in the high school “media center”, and the librarian, (a.k.a. “media specialist”) had signs on the wall.
We learned from one of the signs that the personal library of Thomas Jefferson was the start of the Library of Congress.

While helping a participant with “math symbols”, I was asked where she could find another symbol for square root.
We decided we would have to assemble it, but she wanted to “save it” for future use.

We are often asked, “How do you know all this ‘stuff’?”  We “play”.  We are “geeks”.  We don’t watch television…or at least very often.
So with that said, a video of what I did to answer the question:

Finally, we would like to say thank you to the teachers from Panhandle school district for spending the day with us.  We had fun and you were great participants!