“You read and write and sing and experience, thinking that one day these things will build the character you admire to live as. You love and lose and bleed best you can, to the extreme, hoping that one day the world will read you like the poem you want to be.”
~~Charlotte Eriksson

On March 27th, one of our favorite Facebook pages, Humans of New York (HONY) posted a short piece about StoryCorps. The founder of HONY, Brandon Stanton is both the photographer and the author behind HONY, and it’s Brandon’s thought-provoking questions that encourage and enable people to share their very private and personal stories. The comments and the support of the viewers of this page add to its overwhelming popularity. Brandon is now encouraging people, especially teachers and family members, to use StoryCorps to record conversations and memories to add to this oral history project. 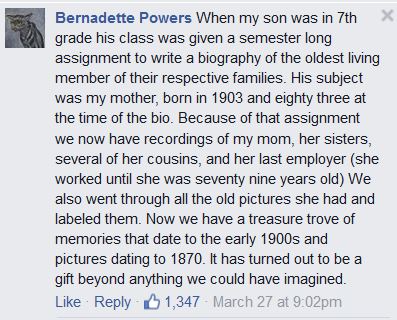 Dave Isay is the founder of StoryCorps, and his TED Talk can be viewed here. Listening to his TED talk will educate you about the history behind StoryCorps and its importance.

What is StoryCorps? From their About Page:

“StoryCorps is one of the largest oral history projects of its kind. Since 2003, StoryCorps has collected and archived more than 50,000 interviews from more than 80,000 participants. Each conversation is recorded on a free CD to share, and is preserved at the American Folklife Center at the Library of Congress.”

Please take the time to visit the StoryCorps website and consider downloading their app to help collect your stories. Start with their “Login Page” to create an account, and you can upload an audio file with an image from their website. We have found creating an account online helps facilitate the login process on the app. 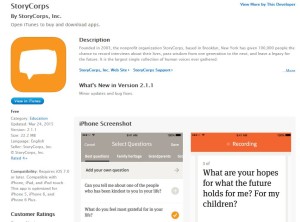 With the newly released StoryCorps app, it is now easier to share memories and personal stories.

As an added note, here is a little more about the “man behind HONY”:

It’s a new year with plenty of goals and projects ahead.
Have we mentioned that we are presenting at ISTE?
In Philadelphia?
Have we told you we are excited?
And then there’s travel, building a new home, and selling the old family homestead.
They’re all at the top of the list.
How in the world are we going to keep track of the “To-Do’s” involved!?
Let’s talk about Google Tasks.

We’ve shared Google Tasks when we present “Google Apps for Education”.
We first discovered it as a component of the Google Calendar,
and the calendar was our “tip post” two years ago.
Google Tasks can by synced across several platforms.
Starting in the calendar itself, the option to add tasks can be seen by clicking the “pull-down” arrow on the left side of your calendar where you find the option to enable “Tasks”. By clicking on it, your “Tasks” will appear in a “Tasks Bar” on the right side of your calendar. 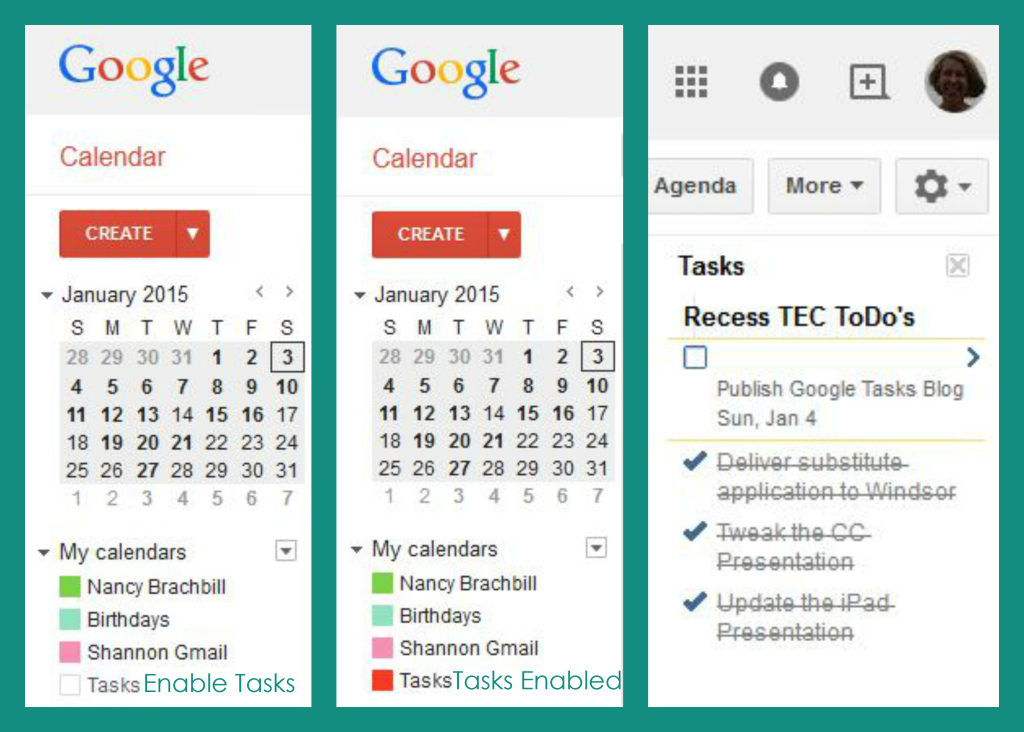 Watch the instructional Google video below that demonstrates adding tasks through your Gmail account which includes tips to manipulate your tasks in your calendar.

And there’s an app for that.
Our “go-to” iTunes app is “Go Tasks” which is free and has excellent user reviews. 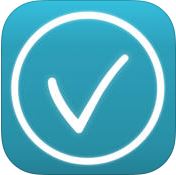 Another option is to make a “homescreen bookmark” as described in this Google video.

Finally, we encourage everyone to use the Chrome browser when working in Google.
There is an extension made by Google, “Google Tasks” which works well.
In researching and reading the reviews, though, we found another extension called, “Better Google Tasks” developed by Matt Atkins. I have installed it, and it does a great job. One of the features I like about this extension is that you can view all of your task lists at once.

We hope these tips help organize and simplify your crazy life a little.
We are working on ours, too. Enjoy what is for many of you, your last day of the holiday break,
and return with a fresh, revised attitude to make the rest of this year the very best for you and your students!

Simplify your life by syncing Google Tasks across your calendar, Gmail, browser, and your mobile…

This is a tip about tips.
A lot of tips.

Dustin Smith is a first grade teacher at Woodrow Cummins Elementary School in Conway, Arkansas with over ten years of teaching experience.
He comes from a family of teachers,
but started out working towards a degree in telecommunications.
Teaching wasn’t the original plan.
We know how that goes.

But what we don’t know is how “Mr. Smith” has escaped us all these years,
We promise there is something here for everyone.
We are the latest fans of his YouTube channel, TeacherTipster.com 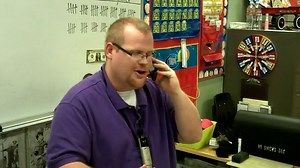 We know.
He teaches First Grade.
And you might be thinking, “How is this going to help me, the high school calculus teacher?”

Again, we promise you, there is something here for everyone.
You will find tips that will add, not only fun, but some practical and motivating management tools to your classroom.
Don’t skip the comments.
His fans often share their own ideas and tips.
One of  the best comments on one such video was, “Are you married?”
Yes, he is married to Miss Suzy, as you will learn in “Fruit for You”.

And the “technology” part?
Mr. Smith’s TeacherTipster.com videos are great examples of what you can do to enhance your curriculum, share your lessons, and hopefully motivate you and your students to produce your own instructional videos.

He has a website with even more tips,
and if you scroll down to the bottom of his home page, you’ll see that he has developed several apps.
There is a Teacher Tipster Pinterest Page,
and you can follow TeacherTipster.com and Mr. Smith on Twitter,

If nothing else, just watch Mr. Smith’s videos for pure entertainment.
His love of kids and teaching is contagious.
And it doesn’t hurt to catch some of that love before you head back to your classroom on Monday morning.
He is a teacher few kids could ever forget…

We are the latest fans of the YouTube channel, TeacherTipster.com.

As I tweak and change the iPad presentations, I’m also thinking about the teachers we’ll be training this week in Palatine, Illinois.

We will be working in a school district where twenty different languages are spoken within the large ESL student population.

Going through the list of apps that we will be introducing to them, I found an app that wasn’t on my device, and one that was new to me.

SayHi will be their “go-to” translator app.

I wasn’t sure how accurate it was, since it defaults to Spanish, so I changed the settings to German, which is my mother’s language and the language I heard and spoke often when I was young.

Every single phrase I spoke was translated “dead on”!

Then I took the same German phrase and spoke into the device for translation back into English and it scored 100% again.
AGAIN!

I wish I knew about this app two months ago when our new student from Mexico enrolled into our school unable to speak any English at all!

Some of the features are:

If you aren’t convinced by all of the features and the low price of $.99,
then surely this Customer Review will “seal-the-deal”:

“I just got married to a Mexican and trying to have conversations was really hard. This app helps tremendously! If you need to learn or have something translate for you. This app is awesome!”

How can you not <3 an app that supports wedded bliss…?!